After our awkward night with the Canadian (it was an 8 bunk room, but just us and her in it), we spent the morning in Nara.

So far, Japan had really succeeded in putting a show on for us, weather wise, and today was no different. Clear blue skies and gentle spring sunshine. Tidy.

Nara is a delightful place, proper old school Japan. Loads of old wooden houses, a beautiful park full of deer who wander around hoping you’ll buy some deer treats from the deer treat sellers. It also boasts the home of the world’s largest indoor buddha. So, big buddhas were definitively checked off the list of things to see in Japan. BIG BUDDHAS. DONE.

The sakura was really blossoming in Nara and you can see why the Japanese go nuts over it. It’s so lovely. I never felt sexy towards a blossom before. We walked around the big park, saw a wedding happening (amazing kimonos) and got cosy with deer. We said “oh, deer” A LOT. We are so funny.

There are also some very tall pagodas in Nara which are difficult to capture well in a photograph. We had a lovely morning walking around Nara, I’ll let the photos do all the work for this post.

there’s no zoom on my camera, I was actually this close to this nonchalant deer.

this creepy looking dude was supposedly good luck if you rubbed him then rubbed a bit of your body you were having trouble with.

even in black and white the cherry blossom is beautiful 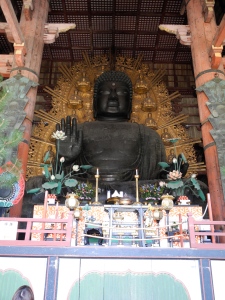 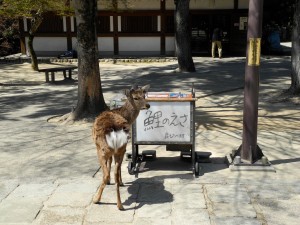 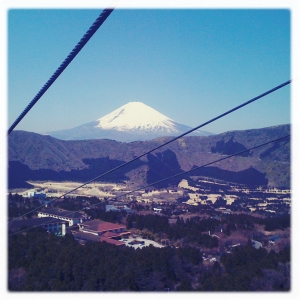 Another glorious spring morning in Japan, though quite crisp as we were up in the mountains. A buffet Japanese breakfast provided by the hotel started our day off with a  ‘what? what is that? oh, wow, that is sour.’ And the eating of some things I’ve never had for breakfast before. One thing they did here and the one other place we had a kaiseki dinner is to garnish rice with tiny dried fish instead of salt. Which can be at bit much at breakfast to see a load of tiny pairs of eyes on your rice. 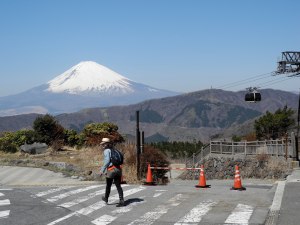 Nadia does Abbey Road in Japan

Anyway. We sent our luggage off with a special service that takes it to the station for you (for a small fee) and leaves you to explore the mountainous region without wheeling a suitcase about. Then we started walking until we got to a sort of visitor centre. There is a staggering amount of stuff to see & do in Hakone but we only had the day as we had to get to Nara in the evening. If you have more time why not check out the open air museums? I definitely would’ve gone if we had more time. As it was, we decided (mostly from looking at a scale model in the visitor centre) to get the cable car over the top of the mountain and come down the opposite side on another rope way and make our way to Odawara station from there. If you do stay longer in Hakone it is worth considering getting a Hakone Free Pass which gives you free travel and entry to lots of stuff.

The ropeway leaves from the side of a big lake where tourist trips are made on PIRATE SHIPS. 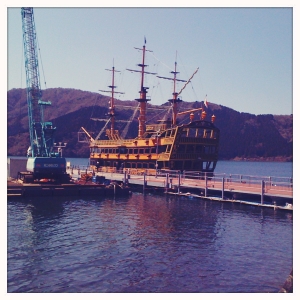 Not real pirate ships, just tourist boat trips on a boat made to look like a pirate ship. Oh, you Japanese. There were also some pedalos and we found a weird graveyard of swan pedalos that made for an excellent hipster photograph. 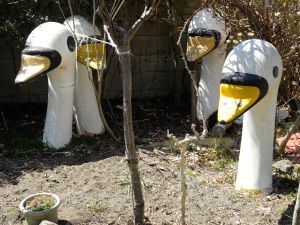 Because tourist numbers were so down there was no queue and we had an entire cable car to ourselves. What larks. The views are pretty amazing, particularly as the higher up you go, the more you can see of Mt Fuji. Let me tell you, Mt Fuji looks exactly like all the drawings of it ever drawn or put on any Japanese art that’s ever been made. It’s almost a parody of itself.

Halfway up we got out and looked at some geysers.

As the photograph may indicate, it was quite smelly. I hilariously kept saying ‘oh, Japan! You’ve really let one off!’ You can imagine what a treat it is to go on holiday with me.

In the steaming geysers they cook eggs. The sulphur, I think, makes the shells go black and you can buy 5 black eggs for 500Y (about £4 at the time). They say each black egg you eat adds 5 years to your life. I had 2

and Luke ate 3. You can only buy them in bags of 5. They taste just like normal boiled eggs. 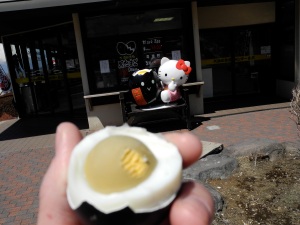 Me and Hello Kitty are BFFs.

We got back in the cable car and over the top of the mountain and decided to come down using the funicular train which runs about once every thirty years. That is a slight exaggeration, but we did wait a long time for the next one. Thank goodness for vending machines – where ever you go can instantly become a cafe.

We rode the funicular train, which took about 10 mins to reach the bottom, after having waited over an hour for it. Then got on a mountain train which was the slowest ever train I’ve ever been on, and I live in a Southeastern Trains area. In the mountain train’s defence – it is meant to go that slowly.

We picked our bags up in Odawara station and zoomed on the bullet train to Kyoto before getting a local train to Nara where we were staying in a 100yr old guest house. I’m sure under normal circumstances, this would’ve been fine but it turned out to be quite weird. There was only one other person staying there and she was sharing a dorm with us. She was a Russian but was convinced she was Canadian. I mean, I’m sure she is Canadian but she had a mega Russian accent. When she said ‘I’m Canadian’ we said ‘oh? really?’ and she said ‘I have a slight Russian accent’ and we thought ‘you sound like you could be in Pussy Riot’ (which isn’t really true because I didn’t know who Pussy Riot were in April 2011 but it’s a reference I’d like to make now in October 2012, the point remains she had a very strong Russian accent which she was in denial about).

We had an awkward time sitting around with her and the owner of the guesthouse who spoke only a bit of English, we went to a nearby supermarket to buy some dinner, and went to bed to avoid the awkward situation. The bunks (like most in hostels and guesthouses in Japan) were very clean, had curtains around each one, its own reading lamp and a plug socket.

Staying in Nara was the only mistake of my itinerary. It is beautiful and lovely, certainly worth a visit, but if I did the trip again I would stay an extra night in Kyoto and visit Nara as a day trip as it’s only 40 minutes away on a local train.

I am the One Hakone, Nobody I’d Rather Be 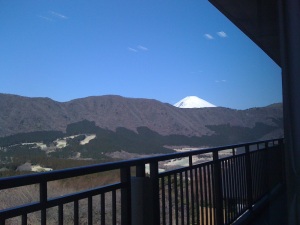 On Monday the 4th April 2011 I began my day with a very long conversation with Ralph in the downstairs toilet. I chose the downstairs because I hoped no one would notice me chucking up the 87 glasses of umeshu I drank the night before. KD’s lovely mother noticed and was very sweet and caring of me, trying to give me tablets and food as I attempted to explain that I must’ve ate something that didn’t agree with me.

KD left to go to work and we were left to pack up and catch a train to our next destination after reassuring KD’s mom that I was fine and that we didn’t need any laundry doing. (what a lovely woman, if only I could book her on to all my holidays)

Back to the bullet train for us. A train from Tokyo to Odawara, then an hour long journey on a small bus, winding up the wiggly mountain roads of Hakone until we got to our ryokan, Lodge Fujimien.

Before we left for Japan I had emailed Lodge Fujimien to express my sadness at the earthquake and its consequences and to check that they were OK and still welcoming visitors. I think because of this, and because numbers were down, they upgraded us to a bigger room! The room was amazing.

Large tatami mat room with a separate toilet room (toilet slippers provided), a sort of pre-balcony indoor balcony, where you could sit in chairs and drink green tea using the tea set provided (hot water in the corridor) and look out towards the highlands of mid Japan, with Mount Fuji taking centre stage.

This was also when we started to use the camera (a Nikon Coolpix) that Luke bought in Akihabara, so photos from here are not just off my phone. What a thrill.

Lodge Fujimien is one of the best value onsen ryokans in Hakone. Your stay includes use of the onsen (of which I have no photos, bad luck pervs) and a traditional kaiseki dinner.

An onsen is a natural hot springs bath. They are usually large public baths that are gender separated. Some posher onsen ryokans have private onsen baths in guest rooms. At Lodge Fujimien they have a men’s bath and a women’s. My advice is to learn the kanji for men and women so you don’t wander into a room full of nudey men/women by mistake.

Once you’ve identified which room you’re meant to go in you stroll into an ante-room where you can take off your yukata (provided in the room), pop it in a basket, and then walk all-bits-out to the bath room. There are quite strict rules about using the onsen (and the same rules apply to sento). There are usually some hilarious posters explaining the rules of the onsen.

2. You must sit on a little stool at the side and wash yourself before getting in the bath.

3. Don’t put anything else in the bath – you have a little towel which you can use to cover your bits and put on your head.

4. Get out and have another wash on a stool. Rinse thoroughly then get back in the bath.

After we enjoyed some hot springs bath time (there was a bit when I was the only person there and I sat at the huge window looking out at mount Fuji sitting in the hot water and cold air cooled my face, it was totally brilliant) it was time for dinner. Again, due to the earthquake hoo-ha, there were very few people in the restaurant. But the staff very pleasantly served us our kaiseki dinner. 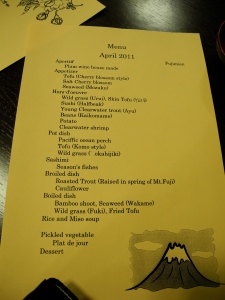 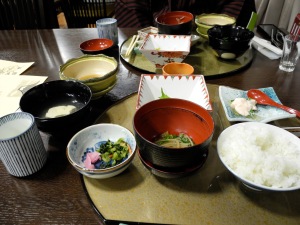 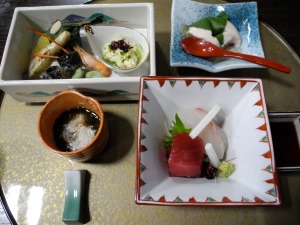 It was pretty amazing, but some of it was sort of disgusting but in a sort of delicious way. There’s A LOT of food. They serve the miso soup and rice last as a sort of filler upper if you’re not completely stuffed by the 18 dishes you’ve already eaten. I have attached the menu – this was not a menu from which you chose what you wanted, you got EVERYTHING on the menu.