The only place to go is Harajuku. This is a bit like the Camden of Tokyo. It’s where all the teens go and on Sunday it’s their cosplay day. Though when we were there, there were hardly any dressed up teens presumably due to earthquake/tsunami/radiation/worried parents.

Before we got to Harajuku though, KD took us to Omotesando to look at the fancy shops, use a fancy toilet (let’s be honest, all toilets in Japan are fancy) and shop in the Official Japanese Souvenir Tat Shop where Luke bought a small plastic jug in the shape of a cat among other treats. 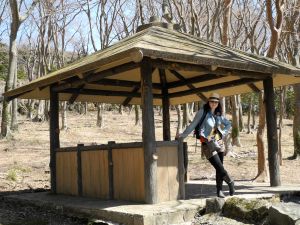 modelling the signature shorts and hat

Harajuku is excellent for fashions. Yes, fashions! I bought a pair of shorts there that have since become my signature shorts and I’m so scared about wearing them out that I’ve poured glue on the crotch. Also, I bought the greatest hat of all time, which looked especially good when I wore it to Wimbledon in 2011.

Harajuku was also where I went crazy for Japanese socks. I don’t mean tabi but a more modern Japanese obsession with inner shoe wear. I wonder if this adorable focus on socks is due to the fact that they spend so much time without shoes on. Anyway, I LOVE them. I bought all these

in one day. And since I struggled to find anywhere to buy them in the UK, I started making my own versions which you can buy on Etsy.

After buying a load of cool stuff, we stopped off for some lunchtime ramen. I also had some steamed buns because steamed buns are delicious savoury clouds and I eat them whenever possible (and in this case the pair looked like boobies, so extra bonus fun).

While we were waiting for the delicious food to arrive, we all cooed over our white watches we’d just all bought for 700Y each. We were a cool white watch gang. 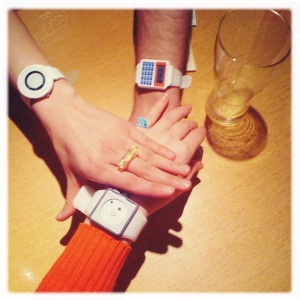 I wore mine until it stopped working in early 2012. Luke stopped wearing his fairly quickly because he couldn’t figure out how to stop it beeping at certain times. Also in the photo you can see a little skull ring I bought for 80Y and a spirit level ring that KD bought from the MOMA shop (where we also bought more cool stuff like a door stop that looked like a paint tube). It was a very buying stuff day. I regret nothing.

After that we strolled over to the Meiji Shrine which was beautiful and serene, only a moment away from the crazy bustle of Harajuku. We saw some trainee monks scuttle about in their white outfits. I should’ve told them where they could buy a matching watch. It was really lovely in the late afternoon.

As the light began to fade we headed to Shinjuku for an evening of maxi fun. KD refers to Shinjuku as ShinCUCKOO! because it’s totally bananas. It has Maid Cafes, but mostly seems to have weird date bars where you can hire a guy/girl who looks like they might be in a J-pop boy/girl band to hang out with you/tell you how beautiful you are/pretend to buy you drinks (you buy the drinks). There are huge signs outside the bars with photos of the boys/girls you can choose. It’s super weird, but because many young Japanese are socially quite shy, they like this explicit social transaction.

Of course we all picked a guy and had the time of our lives. AGH! Can you imagine?! So awkward. British social awkwardness meets Japanese paid-for dating. Just the thought makes me feel shuddery.

We found a small bar where beers were cheapish (400Y) and the telly in the background was playing the cartoon that is set in the area where KD’s house is. The streets have the characters displayed from lamp posts. It felt like our Tokyo home was famous and on TV! We drank a lot of beer but there are lots of toilets in Japan, so that worked out fine. I loved the toilets so much that when we returned to the UK, each cold toilet seat was a painful reminder that we were no longer in Japan.

Our plan was to find somewhere for dinner and then see if we could fit in a bit of karaoke.

TOP TIP: learn to read Japanese! Obviously that is good advice if you are good at learning languages in a few minutes. the tip is actually: LOOK UP! each floor has a different business on it and they’ll advertise at each level, sometimes with a board outside on the street. KD found us a restaurant on the 5th floor of some building. The lift opened directly into the restaurant. We had to take our shoes off and walk across a raised floor and were seated at a table that’s hard to describe. They have the same set up at Edo in Crystal Palace, if you’ve ever been there. There were a few things on the table ready for us to eat as hors d’oeuvres. One of the things was a sea snail which was much tastier than I would’ve anticipated.  The restaurant (like many) had a sort of set meal deal, with an all-you-can-drink option, which we obviously opted for. We started off on some ‘sours’ which were basically alcopops. One of my favourite moments of the holiday happened here as Luke asked KD to order him a kiwi sour (having previously had a lemon sour) and she asked the server for a ‘remon sour’. Luke then said, ‘does remon mean kiwi, then?’ to which KD replied ‘oh, no, remon means lemon, you see it’s like lemon but the l is an r. Oh. I ordered you the wrong drink.’ Cue LOLs all round. 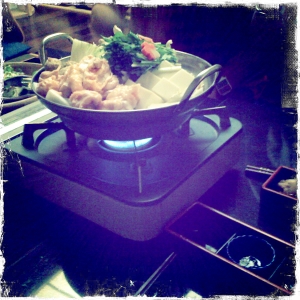 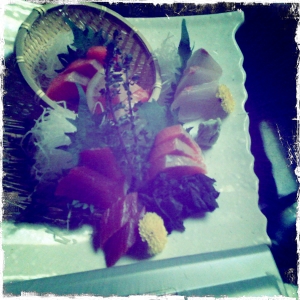 We ordered a nabe, similar to shabu shabu – a hot pot cooked at your table. And, despite many locals avoiding sashimi due to radiation worries, we ordered some and it was SO GOOD I don’t even care if it glowed.

A small thrill was going to the toilet in the restaurant as they gave you special toilet slippers and you had to walk over a fake small river.

So, we ate a lot and we drank many remon sours. Sozzled, we stepped back out onto the seedy streets of Shinjuku and looked for a karaoke fix.

KD found a guy on the street promoting a particular place and haggled us a pretty good deal. We said we’d try it for an hour and then go home (as the next day we were leaving Tokyo for Hakone). When you do karaoke in Japan, you get a booth, some tambourines if you want, a fully hooked up karaoke system and all-you-can-drink with a telephone to ring the bar to get them to bring you more drinks whenever you want. Three hours after we’d said we’d go home we were paying for 4 hours of karaoke/drinking. I think our deal was about £13/hour/pp, which is relatively cheap, but a lot when totalled together at 3am for 3 people.

It was worth every penny. I drank a million gallons of plum wine and we sang all the songs. It was the greatest night of my life. Also, I now know how to say “3 plum wines, please”  in Japanese.